Road Work: Vernon Road Work Update            Monday, August 8th there will be culvert work at WEST ROAD  near the intersection of POND ROAD, between 6 AM and 6 PM. Expecr delays. There will be a road plate for cars to pass through.           Tuesday, August 9th. POND ROAD WILL BE CLOSED NEAR THE WEST  ROAD INTERSECTION FROM 6 AM TILL 6 PM.  Please take alternate routes. You will be able to access Central Park  Road via Washburn Way.  In case of bad weather, the work may continue into Wednesday the 10th.

Visit our archive of historical articles and cemetery information: 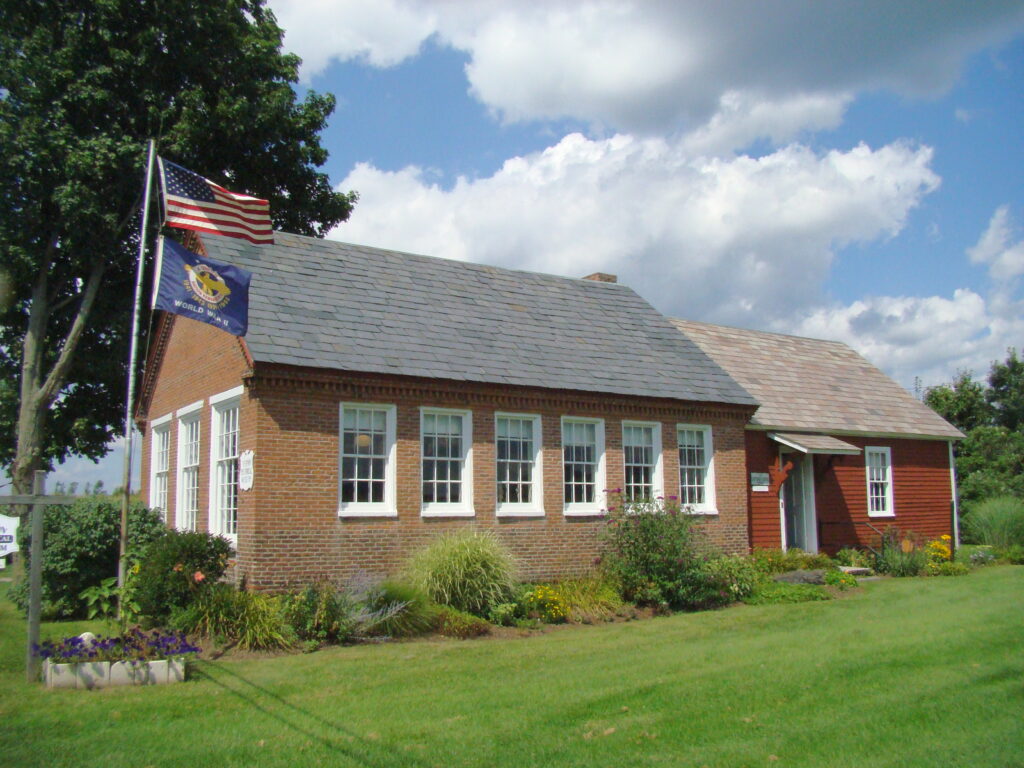 The Vernon Historians Museum is located in this former one-room schoolhouse at 4201 Fort Bridgman Road. The Historians also own and maintain the Pond Road Chapel, 634 Pond Rd.

The Vernon Historians is an independent 501(c)3 non-profit organization separate from the town government. It exist for the purpose of preserving historical materials and artifacts. This helps us to picture life and events of the past, which have shaped our community. Preserving and recording are a significant part of our program.

The Vernon Historians maintain a local history museum in a one-room brick schoolhouse (c. 1848), which contains the original schoolroom, farmhouse kitchen, farm tools, plus Vernon photographs and artifacts. They are also custodians of the restored Pond Road Chapel, built in 1860, which is on the National Register of Historic Places. The chapel is used for special events and is open by appointment.

How Vernon got its name

Vernon is the very southeastern corner town of Vermont, and the smallest in Windham County. Its size was determined by the action of Benning Wentworth, New Hampshire’s first royal governor. His was a determined course of granting “cookie-cutter” six-mile square towns from the Atlantic shore to the New York border. On reaching this locality, the square town, named Hinsdale, was split diagonally by the Connecticut River.

Wentworth’s land grabbing did not sit well with Provincial Governor Tryon of New York, who had already made grants of his own for some of the same territory, east of the river. Plus, even earlier, the Massachusetts Bay Colony had “bought” land from the native population, laying out townships along the river, including Vernon.

The turmoil set the stage for Vermont’s hero, Ethan Allen, and his “Green Mountain Boys” to free the disputed land of all claims. Thus, the Republic of Vermont was born, holding that distinction until 1791, when it was accepted into the union as the 14th state.

However, the confusion did not end there. Even after statehood, the town kept its name of Hinsdale, like its “half-sister” town across the river in New Hampshire.

Finally, at the Town Meeting of 1802, the Vermonters suggested that their town be named “Huntstown”, honoring a distinguished resident, Lieutenant Governor Jonathan Hunt. His wife Lavinia, however, suggested it be called Vernon, after the British Admiral Edward Vernon, friend of the George Washington family, and for whom Washington’s home Mount Vernon was named. Thus, Vernon became the only town in Vermont named by a woman!

This article uses material from the Wikipedia article Vernon which is released under the Creative Commons Attribution-Share-Alike License 3.0.