A presentation to the Vernon Selectboard on February 16 documents that total tons of trash collected from Vernon households declined significantly in three years, from 250 tons in 2018 to 198 tons in 2020, a reduction of 52 tons, or 21%. This reduction is primarily attributable to Pay-As-You-Throw, which started in 2014. The intent of PAYT is to provide residents with a financial incentive to reduce their trash generation, and to divert recyclable materials from the trash, thereby reducing tons of materials going to landfill.

Vernon is one of only three towns out of 18 in Windham Solid Waste Management District (WSWMD) that offer residential curbside trash and recycling services (Brattleboro and Westminster are the other two towns). The Vernon program costs about $140,000 per year, and is approved by town meeting. 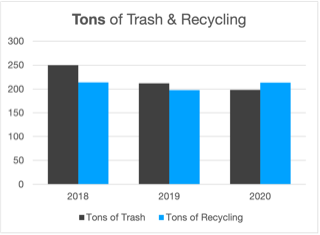 The Town started a 3-year contract with Triple T on July 1, 2020, to service the Town’s approximately 960 households, as well as the Town office, highway garage, and recreation center. 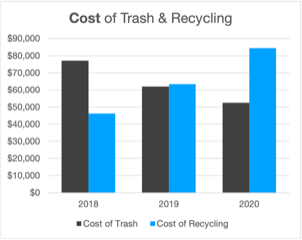 A major contributor to the high recycling rate was the food waste/organics drop-off program at the highway garage, which increased the recycling rate by 15% to 20%. That program was discontinued by the Selectboard in August 2020 for a number of reasons.

Each food waste dumpster held 2 cubic yards, and when both were full, a total of 4 cubic yards was collected each week. Triple T did not separately weigh the Vernon dumpsters since they were collected by a truck with other customer’s organics, and hauled to Martin’s Farm in Greenfield to be composted.

Based on weights of similar food waste dumpsters at WSWMD, it is estimated that 1 ton per week of organics was collected for composting in Vernon, for an estimated 52 tons per year.

The next phase of the WSWMD analysis will review Vernon’s PAYT program costs and revenue, including the price paid for both the small and large bags. Vernon residents spend approximately $75,000 per year purchasing the required PAYT bags, and this new evaluation will be used to update the total costs for trash and recycling.

Questions about recycling and composting can be addressed to Bob Spencer at his email: director@windhamsolidwaste.org.